Late To The Party

Late To The Party

30:00
Late To The Party (aka Abandoned Casa DeVitt) is the seventeenth mission of Desperados III.

In the first part of "Money for the Vultures", the gang reunites once again to hunt down Vincent DeVitt's hidden riches.

Help them uncover a mysterious vault, avoid bloodthirsty looters, and find out if the enigmatic Rosie from Baton Rouge can really be trusted, or if she has her own interests in mind.

Three months after the showdown at Devil's Canyon, the gang comes together once more.

A message from Hector promises a lucrative deal: a hunt for the hidden riches of Vincent DeVitt.

They arrive at DeVitt's estate, now tarnished by neglect and the hands of greedy looters.

With them is the mysterious Rosie, a dubious aquaintance from their escapades in Baton Rouge...

Three months after the showdown at Devil's Canyon, the gang reunites for a special job.

Rosie, a dubious aquaintance from Baton Rouge, wants their help to hunt down the hidden treasure vault of Vincent DeVitt.

On returning to the now abandoned Casa DeVitt, the gang must now make their way through bloodthirsty looters to the statue in the front yard.

A hidden switch on the statue is supposed to reveal the vault. Once that's done, the only thing left to do is clear it out. Oh, and Cooper is somewhere too. 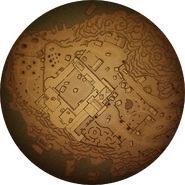