Climbing, swimming
Isabelle Moreau is a voodoo practitioner and first joins the gang in Desperados III.

Born and raised in New Orleans, Isabelle mastered the occult techniques of Voodoo. In early stage of her life she did not mind to abuse her Voodoo techniques for money, but Wayne helped her to change her vision and life.

her fist to knock them out instead.

She has a cat that she can send out to distract enemies for a short amount of time. Being a voodoo practitioner Isabelle also has some more unique and unusual abilities.

She can connect two living creatures causing anything that happens to one to also affect the other*.

She can also mind control an enemy or animal via a blood sacrifice, taking over control of them and leading them to perform any action according to her command**. The blood sacrifice causes her too lose one hitpoint.

Isabelle also carries some Jimson Weed with her that can be used to heal herself or any other character by one hitpoint and allows her to use mind control multiple times.

Additionally Isabelle can climb ladders, ivies, and ropes and also swim. She can also tie up unconscious people and carry a single body in standing position.

Isabelle can connect any two living creatures, including guards, civilians, and playable characters; even unconscious ones, but also chickens, dogs, horses, and oxen. The two entities can be arbitrarily far away and only need to be in range of Isabelle when she marks them. A connection can be canceled by performing it on an already marked creature.

Generally, anything happening to one of the connected creatures also happens to the other. There are however a lot of special cases and particularities to take note of:

When mind-controlling, Isabelle can perform some unique actions depending on the controlled creature.

When controlling humans and dogs Isabelle can freely move them around. When using an ability, leaving the control range, or

canceling it they will fall unconscious. Suspicious actions like attacking somebody will take several seconds and alert any enemies looking at the controlled target. They will try to prevent the action by killing them. However, if successful the action will not cause observers to trigger an alarm. Instead, they will think the culprit was a traitor and kill them instead.

When controlling most guards, Isabelle can make them shoot at somebody.

Thugs don't have a gun and can instead be made to hit somebody with their shovel. The effect is the same as a gun shot and is able to stun Long Coats.

Long Coats can only be mind-controlled when stunned i.e. after getting shot. Like most guards they can then be made to shoot somebody.

Civilians can be made to scream, luring all enemies in range, even Ponchos and Long Coats, to the location.

bite an enemy, killing them or stunning Long Coats as if shot by a gun. Additionally, they can also

Horses and oxen can not be moved but they can be made to perform the same action as when irritated by Cooper's coin or Kate's perfume.

Horses will kick behind them, knocking out any person standing there and

oxen will kill everybody standing before their horns. 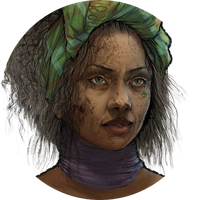 Isabelle after being captured and brought to DeVitt's goldmine.
Community content is available under CC-BY-SA unless otherwise noted.
Advertisement